A post in the Create Your Style with Swarovski Elements community sparked some thoughts in regards to designing and how the best laid plans can sometime go awry.......

I personally enjoy this part of the creative process, I think I am going to do one thing with the lastest piece I am designing, a detour happens and a new creation emerges.

Truth is ......sometimes designs work, sometimes they don't.......either way I am good with it not turning out as I originally planned as long as I am happy with the end results of the piece. I think it is important for us to remember the journey and the love of designing as much as just deciding that "Project Sparkles" has to turn out exactly this way! Fantastic when that happens but let's be realistic, that just doesn't happen all the time.

Case in point: I had an inspiration necklace that I had designed on paper for a big project, thought (thought being the operative word) that it could be executed one way only to find out that it was absolutely not going to work (much mumbling and grumbling happened along the way I might add).....end result, I had to totally rework the necklace. Surprise! It actually turned out much better the new way as well as it was more wearable and had stronger execution for the overall necklace yet still retained the essence of the original design. Really unless I told you which piece that was and how it "should" have been, you would never know the difference, LOL! I have no doubt that each of my fellow ambassadors could tell you a similar story.

Recently, I was asked to design some pieces for a beading magazine. I was so delighted to have been asked, of course I had so many thoughts and ideas about what to design. Finally after much personal debate, decided what I was going to create and you know what......???? Almost none of the finished pieces that I sent in looked like what I originally planned to do ( which was fine for this particular project). The beautiful pieces morphed and created into stunning pieces that looked nothing like what I thought that they would. I liked that I was open to the changes and was pleased with the results!

Now truth be told, if the project needed to look a certain way then I would make that happen ( goes with the job, LOL!) but I like the freedom of designing when I am not locked into a certain type of design.

Sometimes we can unlock the creative juices just by being told we can only use a certain technique and need to create designs that fit into the technique vs a particular design. I had another recent project where I was asked to create several unique stringing projects using certain colors and themes ...... honestly, I don't do a lot of stringing these days more wire and mixed media projects. However, I can tell you that some of my recent favorite jewelry pieces (full of SWAROVSKI ELEMENTS pearls & crystals of course!) that I wear quite a bit these days were created and inspired by that project request. Who knew that I would rediscover an old love!

I think it is nice to share our "real truths" about adventures in designing....takes some of the fear out of it especially for beginning designers. I personally do that in the classes that I teach, giving my students tips, tricks and things I have tried that didn't work and why it didn't work in addition to the ones that of course do work......I have also gotten lots of fantastic tips from my students in return as well!

Honestly, the process and planning does get easier and you can create exactly what you want to create when you need to but be open to the detours and where they can take you while designing! You might be surprised where you end up!

not sure how I ended up on this blog, but it is wonderful. Great job and that is amazing artwork that you create. Following you now.

Great articles, and some pieces you made are really amazing. I like them. 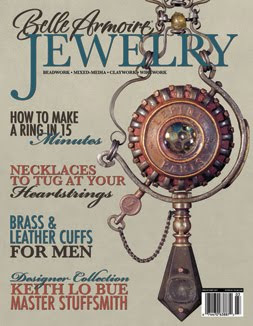 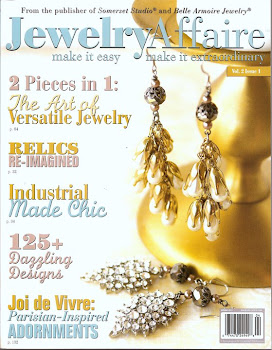 My Necklace is on the Cover of Jewelry Affaire Magzine

Want to go shopping at the Beach? Click on the link you want......

Blogs We Love Here At The Beach!

Websites That We Adore!

All written, photo, and graphic design content on this site are the sole property of June Beach Collection and June Beach.

Please do not copy, borrow, reproduce, or otherwise approximate any content from this site without written permission from the above. Thank you.